Guinea pigs are great to have, but sometimes these small pets can really stink up a room. The smell of their urine-soaked bedding can be a little too much to handle sometimes.

You can really start to notice the smell when you walk into the room that has their cage in it.

It’s natural for a guinea pig’s cage to smell, but if you want to get rid of it you’ll need something that eliminates those odors.

The best odor eliminators for a guinea pigs cage are:

So if the smell of your guinea pigs cage is becoming an issue for you and you want to know more about the odor eliminators that can help solve that problem, check out our top 7.

This highly rated odor eliminator is perfect for removing the smells from a guinea pig’s cage because it works on a number of different surfaces.

It does a really good job of taking away the smells from tanks, hutches, and all types of different guinea pig enclosures and toys.

It can also remove some smells from their bedding. So if the odor of guinea pig urine is a problem for you, then this just might do the trick.

It’s honestly really easy to see why this odor eliminator is one of the best for guinea pig cages. 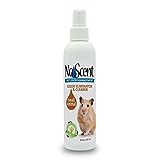 This next odor eliminator is another spray that can get the job done. It’s made to work well for guinea pig cages as well as other small pets and their habitats.

The baby powder smell helps with the removal of odor but it isn’t too strong. Even though the bottle is only 8 ounces it still packs quite a punch.

It only takes a couple of sprays on a guinea pig’s bedding to start removing the smell of their urine and other smells they can produce. 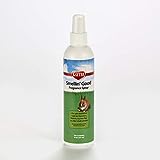 This odor remover is one of the most unique ones on this list because of how it actually eliminates the smells in a cage.

With this one you don’t spray it on their bedding, you sprinkle it below or on top of it.

When you sprinkle it into a guinea pig’s cage it helps remove the ammonia smell that their urine can leave behind at the microbial level.

After you add it to their bedding it starts working immediately to remove bad smells and harmful pathogens from their enclosure. It’s made with hypoallergenic ingredients and is non-toxic.

It’s even safe if it gets ingested by humans and pets, plus it’s biodegradable. Guinea pigs have very sensitive lungs and eyes, and this odor remover doesn’t contain any perfumes, harmful chemicals, or masking agents.

So it does a really good job of eliminating different smells while still keeping your guinea pig’s lungs and eyes safe.

What makes this odor eliminator different is that it can be used directly on your small pet as well as in their cage. It makes use of baking soda to deodorize your pets and their enclosure really well.

Baking soda is known to be a natural and safe odor remover, and this spray makes it easy to bring the usefulness of the baking soda into your guinea pig’s cage.

You can spray it into their cage to fight odors or directly on to your guinea pigs to help with their smell over time.

If you do decide to use the spray directly on your pets it can help with grooming and at the same time make sure they stay smelling fresh for a longer period of time. 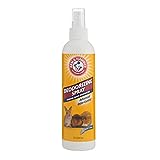 This non-toxic and biodegradable odor eliminator is a solid choice. It can help get rid of troublesome smells in your guinea pig’s cage without leaving behind and annoying odor.

So it doesn’t try to remove the odors by covering them up with a perfume-like smell.

Because it’s made to be unscented, that means it’s a safer option for your guinea pig’s lungs.

It’s a good choice for them because it’s better than an odor remover that just tries to cover up smells instead of actually eliminating them.

It can be used on all types of bedding and litter, and it helps prolong the fresh smell of bedding as well.

If you live in a house with a number of pets then this odor remover might be perfect for you.

It’s safe to use around other bigger pets in your house as well as your small pets.

It works to get rid of odors on many different surfaces and it also disinfects them at the same time.

Also, it doesn’t have a perfume-like smell so it’s safer for your guinea pig’s sensitive lungs.

So this is a great choice if you’re trying to use a safe disinfectant to clean your guinea pigs cage, while also removing the odors of their cage while you’re using it. 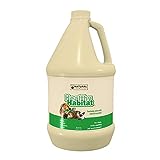 Doubling as a cage cleaner and deodorizer, this spray can both clean your guinea pig’s cage as well as remove some of the smell.

It’s used for spot cleaning their actual cage and accessories and not for spraying directly on their bedding.

The spray is basically a safe cleaner that also deodorizes. So it’s a great pick if your main goal is to clean their cage and deodorize it in the same process. 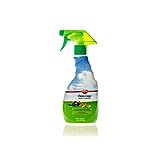 When looking for an odor eliminator for your guinea pigs, the first and most important thing that you need to consider is how well it removes the odors.

Check to see if the one that you choose actually gets rid of the odors or just covers them up.

Some odor eliminators claim to remove the smells when actually what they’re doing is trying to cover the smell up with a type of fragrance.

Of course, it’s not always possible to be completely odor-free, but the best odor removers do their job without leaving behind too strong of a smell.

Leaving behind a strong smell can be bad for your guinea pigs because they have sensitive lungs.

That’s why most of the good sprays that help with removing smells in small pet cages try to avoid using perfume-like fragrances.

So when selecting an odor eliminator for your guinea pigs, go with the option that is the most fragrance-free.

Some sprays will help disinfect and remove smells from your guinea pig’s cage and that’s great if that’s what you’re trying to do.

But if your only concern is getting rid of bad smells, then you’ll want to go with the option that specializes in odor removal.

So when selecting the best odor eliminator for your guinea pigs, just know that the ones that work best are the ones that their only job is to remove those bad odors.

Without those odors in their cage, your guinea pigs will be a whole lot happier.

Hey, I'm Guliana. I really love animals, especially small ones. I grew up having gerbils and guinea pigs as pets and know a lot about them. That's why I'm passionate about writing everything I've learned about them over the years.

Gerbils are one of the most adorable and friendly pets out there. They don’t take up much room and are always ready to play. So, if you’re considering adoption, you’ve come to the right...

Continue Reading
link to What Is the Difference Between a Gerbil and a Hamster?

People have been adopting gerbils and hamsters for many years. Both are adorable little creatures that make for excellent house pets. However, some people have a hard time telling the critters...