If you are thinking about getting gerbils or already have them, you should know that they chew on everything. Not everything that they decide to chew on will be safe for them though.

Plastic being one of them. So if you’re asking can gerbils chew on plastic, then the answer is yes, they will chew anything they can. The better question is if it’s harmful to them or not.

Knowing the answer to this question is a must for everyone who has gerbils at home or is looking to get some.

As small pet owners we should also know how to deal with plastic chewing, so we can keep them in a safe and healthy environment.

Why are My Gerbils Chewing on Plastic?

Gerbils usually don’t just single out plastic and chew on only that, they chew on anything they can.

That being said, it still seems like plastic is one of their top choices when it comes to chewing on things. Why is that?

The reason why they like biting on it so much is that it’s easier to chew on than most other things in their cage while still being beneficial to them.

It’s hard enough that when they chew on it, it helps keep their teeth from growing too long. It’s also soft enough so they don’t hurt their teeth while biting through it.

Do Gerbils eat the Plastic?

So we definitely know that our gerbils are chewing on the plastic, but are they biting it and spitting it out, or eating it?

The good news is that gerbils only chew on plastic and they will usually not swallow it.

They won’t eat it intentionally because they know it’s not food,  but that doesn’t mean they can’t swallow some accidentally, so always check to see if they are.

Also if the plastic in their cage isn’t rodent friendly it could end up having chemicals present that might get mixed in with their saliva and enter their stomach, which can have really harmful consequences.

If not stopped at the right time, this harmful habit may end up shortening their life. So if you have plastic that isn’t specifically for rodents be sure to take it out of their cage.

Also if you see signs of your gerbils actually eating the plastic then it may be time to take them to the vet to see if it has done any harm.

Are They Chewing on the Plastic Cages?

There are some gerbil cages out there that are a mix of plastic and wire. Buying these kinds of cages can be a mistake, they sometimes have plastic edges that stick out in the cage that your gerbils will surely gnaw at.

These cages are cheap and usually don’t offer enough space for your growing gerbils.

Unfortunately, first time gerbil owners buy these but soon find out that their gerbils are constantly chewing on it. This can be avoided by keeping them in a nice sized fish tank.

Most gerbil owners recommend using big fish tanks as they provide them with enough space to play around and no plastic edges to chew on.

Just make sure to get the appropriate sized tank for how many gerbils you have. So if your thinking about getting pet gerbils, start with a fish tank habitat instead of the cheaper plastic and wire mix one.

Can you Stop Gerbils From Chewing on Plastic?

You won’t really be able to stop them from chewing the plastic, because if it’s in their cage, they’re going to chew on it.

However, there are ways to keep them from chewing on plastic all the time, and it’s simply by having less plastic for them to chew on.

If you do that while also having some alternatives for them to file their teeth on, they won’t really have the option to chew on it.

That’s the best way to stop them because if you give them anything they can possibly fit in their mouth, from wood to plastic, they will gladly bite at it until it’s gone or it’s taken away.

Take out as Much Unnecessary Plastic as Possible

Chewing on plastic isn’t the best thing for them, so it makes sense to switch it out for some better alternatives.

Most of the items they use in their cage can be replaced with wooden versions.

Things like their litter box, food bowls and houses are usually chewed on and should definitely be replaced if you see signs of them chewing on it.

Most times new pet gerbil owners will buy these items that are made of plastic when they adopt them. They’re cheap, easily accessible and usually in the same aisle as the gerbils.

But usually, in that same aisle they have the wooden version. They don’t cost that much more than the plastic versions and are much safer to chew on for your gerbils.

Some stores even carry a ceramic version of their food bowl. There are however, certain items that you can’t easily switch out and that’s okay.

Things like their running wheel usually just come in plastic and metal. The metal running wheels have holes in them that their tail can accidentally get caught in and they’re also very bad for their feet in the long term.

What if I Can’t Take it out?

I get it, sometimes you have no choice, so in some cases it’s understandable if you keep the plastic versions in the cage.

Even though it’s plastic, wheels like the Silent Runner Exercise Wheel are the best for your gerbils because it doesn’t have those holes in it for their tails to get caught in. 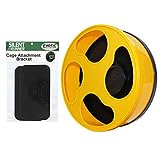 If you’ve been looking for a wheel that doesn’t keep you up at night while they run, this is the perfect one.

So if you’re a new owner or you’ve had them for a while, definitely think about switching the plastic items out for their alternatives.

So, What can Gerbils Chew on Besides Plastic?

This overtime will gradually impair their ability to eat, which may lead to starvation. So, as loving pet owners, it’s our duty to provide them something safe to chew on. So if they can’t chew on plastic, what can they chew on?

One of their favorite items to chew on is toilet paper rolls. They like these because it’s easy to bite on and they also have fun trying to run through the tubes.

These are a great option because we all have a steady supply of toilet paper rolls, that’s a good thing because gerbils will chew through these quickly.

They love paper towel rolls the same, if not more because it’s the same as the toilet paper roll except longer lasting.

Small cardboard boxes with no dye on it also make for a good chew toy. They’re a little bit harder than the rolls which are great for their teeth. Plus they provide little huts for them to hide in while they chew on it.

If you’re looking for something that is a little longer lasting, then you can always give them wood to chew on. Stores usually carry wooden sticks, bark and all kinds of wooden toys that are safe for your gerbils to chew on.

It’s great because it’s harder to chew on, so it does a better job than toilet paper rolls when it comes to keeping their teeth at a good level.

If you’re planning on using any of these plastic alternatives, make sure that they’re all rodent friendly.

It’s always a good idea to switch out plastic where you can, so your gerbils have safer options to chew on. In the end, this will be better for them and their teeth.

Hi, I'm Mason, I've kept small animals as pets since I was 8 years old. I love to learn and talk about them basically every day. Over the years I've adopted small pets like hamsters, gerbils, and guinea pigs.

link to What Do Chinchillas Eat in the Wild?

Continue Reading
link to What Does It Mean When Birds Go Crazy?

Whether you have a small pet bird, such as a canary, or a larger bird, such as a parrot, you may be mystified by their occasional crazy behaviour. Birds are just like other domesticated pets, they...