Having a clean habitat is very important when owning pet gerbils. They spend most of their lives in the habitat that you’ve bought or built for them, so keeping it clean should be at the top of the priority list.

Gerbils tend to find their favorite spots in the habitat to go to the toilet. When they find those spots, they will mainly only use those spots to do their business.

So how do you litter train a gerbil? Once you notice where your gerbil starts to bury their waste, you can then put a litter box in that location for them to go in.

There are slightly different methods of litter training depending on if your gerbils are new, or already established within their habitat.

Let’s take a look into what you need to do for both situations. I’ll also include what you will need and the best practices for litter training your gerbils.

Just like training all other pets, every gerbil pet owner’s experience while litter training will differ.

Most of the time litter training new gerbils will be a little easier than training them to do something like sitting on your shoulder because it’s simple and they aren’t fully set in their ways yet.

I did some research into litter training new gerbils and I found a great method that seems to work best.

Set up the litter box beforehand.

Place your gerbils in their new habitat.

Watch your gerbils to see when they find the litter box.

Notice the signs of your gerbils using it as a litter box.

Once they start using it frequently and you see the signs that they are, you’ve successfully litter trained your new gerbils.

If your gerbils have already established themselves in their habitat without a litter box, don’t worry it’s not too late to use them.

You have a few methods that you can try to litter train them. Here, I go over the ones I found while researching this topic.

Watch your gerbils to see where they prefer to use the bathroom. Then place the litter box in that area.

They already associate that area with being a place to use the toilet so it will be an easier transition.

If they start to use the litter box then that’s great, but if not then you can move to the second method.

Place the litter box in the area where they use the bathroom. Then place already peed on bedding inside their new litter box.

This method should be a little easier because gerbils will use their great sense of smell to find that familiar scent.

If both of those options don’t work, then try deep cleaning their habitat and putting the litter box in there.

Next, make sure to only put bedding in the area they sleep in, to make sure they have comfort.

They will start to only use the litter box instead of peeing on the bedding that they use with their house.

Once you see that happening, then you can return to putting bedding throughout their habitat. It’s very unlikely that they will go back to their old ways when using this method.

Where Should the Litter Box go?

Finding the best location for the litter box can sometimes take a few attempts to get right.

You have to consider where your gerbils will more likely use it and you also have a limited space to work with. Generally, small pets like gerbils don’t go to the bathroom where they drink, eat or sleep.

So with that in mind, the litter box would probably be best away from those locations and in a corner.

A corner is a great spot to put the litter box because gerbils feel safer when they know nothing is behind them.

Having it in the corner instead of out in the middle of their habitat will also prevent them from nudging it into their other toys, like their running wheels.

Putting the litter box in the right spot really just comes down to where you have the space to put it, and where your gerbil wants it.

Potty training your gerbils can be really easy if you do it the right way. The gerbils mainly do most of it themselves anyway.

What makes it even easier is when you have the right tools for the job. There are pretty much two things that you’ll need if you don’t already have them that I will discuss.

Litter Boxes That can be Used

There are generally 2 types of litter boxes, store-bought and homemade. Each having pros and cons for you and your gerbils.

Most store-bought litter boxes are going to be plastic, which your gerbils will likely chew on. (It’s not good for them to chew on plastic excessively so make sure to monitor that.)

They’re not that expensive and they usually come with a small bag of litter to try, and a scoop. They’re also very easy to clean out with water or small animal cage cleaner spray.

For a really great deal on a litter box check out the box below. This litter box comes with a scoop, litter, and also a small bag of dust for dust bathing. 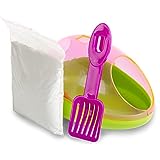 If you wanted to make your own litter boxes at home, it’s best to make it out of wood that is safe for gerbils because again, they will chew on it.

You may have to switch out the homemade litter boxes more frequently if you decide to use wood to make it, so you can be sure to keep their habitat clean.

Both options will work but it’s up to you and your gerbils to decide which one is right for them.

Just having the litter box is obviously not enough, now you need something to fill it with.

We call it litter box training or potty training gerbils, but what you’re actually going to be using is sand to fill the litter box.

The sand is used to let the gerbils roll around and clean themselves at first, then they will start to use it as a bathroom.

You want to make sure to use quality soft grain sand that is 100% dust-free so that it doesn’t hurt their lungs when they use it. You can try Tiny Friends Farm bathing sand which is both 100% dust and bacteria free.

It’s best to use sand instead of the actual small animal litter because it’s more natural for them and allows for cleanliness.

Can you use cat Litter for Gerbils?

Cat litter is usually scented, and the smells that it creates are too much for them. It’s best to stick with store-bought, rodent safe sand when filling your litter box.

The litter box keeps your gerbils clean and gives them a place to go to the bathroom. It’s important to keep it clean to prevent any kind of bacteria growth.

While your gerbils start to use the litter box more often you’ll begin to notice the signs that it’s time to clean it.

Sometimes it can be hard to see if it’s time to empty it out, so here are 2 signs you can look out for.

Once you notice that it’s been used a decent amount, it’s time to time to take it out and clean it.

It’s recommended that pet gerbil owners take the litter box out, clean then refill it every 1 to 2 days depending on how many gerbils they have and how often they use it.

When cleaning the litter box, do not use any scented soaps or cleaners because it will slowly start to affect their lungs when they breathe it in.

What if They Don’t use it?

If your gerbils decide they don’t want to use the litter box to go to the bathroom, that’s perfectly fine.

You can still try the different methods of litter training them as long as they seem comfortable with it.

If they seem stressed at all throughout their litter training, it’s best to stop and revisit it at a later time.

You should still keep the litter box in their habitat so that they can still clean themselves.

Keeping the litter box in their habitat and changing it often, will promote a lower level of hair grease. Most importantly, it’s a part of keeping your gerbils healthy.

Hi, I'm Mason, I've kept small animals as pets since I was 8 years old. I love to learn and talk about them basically every day. Over the years I've adopted small pets like hamsters, gerbils, and guinea pigs.

Gerbils are one of the most adorable and friendly pets out there. They don’t take up much room and are always ready to play. So, if you’re considering adoption, you’ve come to the right...

Continue Reading
link to What Is the Difference Between a Gerbil and a Hamster?

People have been adopting gerbils and hamsters for many years. Both are adorable little creatures that make for excellent house pets. However, some people have a hard time telling the critters...